Hey everyone! As you can tell from the title…I chained some more SHiny Pokemon!! I wish I wrote down the dates that I caught them, but recently, I’ve caught more new ones, All within 2-3 weeks. Mind you, I don’t chain everyday, but if I do, it would be like 2 hours max a day, (I can’t do more than that, I get headaches lol)

So from my previous posts, I mentioned that I got a Shiny girl Eevee. I know I’m being picky (and sexist… >.<), but I wanted a boy Eevee, because of the nickname I wanted to name him. SO I chained again, and after about 100 or so encounters (I forgot the number of the chains) another Shiny Eevee popped up! And it was a boy! But…..schynozed didn’t work! It wasn’t Impish, it was a neutral nature! -__- Not only that I took him to the IV checker and let’s just say…he sucks lol. Poor thing 😦 Anyways, he wasn’t useable, so I took a break from chaining Eevees Because at that time the sound it makes was making me go crazy.

In between all of this, I tried to Shiny breed again. ITS SO BORING OMG. ALL YOU DO IS RUN AROUND IN CIRCLES AND WAIT FOR THE BABIES TO HATCH OMG. It brought back terrifying memories of my XY shiny breeding days…and still no shiny ;___; I’m trying again at a Shiny Axew, because chaining him in the cave is suicide.

And so, just yesterday (I’m writing it on the day before..because no itnerent..again..) I was chaining them again, and then just when I was talking to my sister about not getting one..another one popped up!! And it was a boy….WITH 3 IVS!! It was amazing!! I caught him, and low and behold, it had the nature I wanted!!! So with that, I finally named him Kuroko, the to be Shiny Umbreon! Because it fits! It fits so well! That’s why I was so picky about the genders :’) I’m so happy because it was more than I wanted, and the cutie pie showed up just when I felt like giving up. That is really the best part, when you least expect it. 😀

The very next day, that lovely encounter made me want to get another Shiny xD So I decided to try my hand at fish chaining. I never really did it before because of no patience, but now that I have free time (lots of it…) I was like, what the heck lets chain a Shiny Pokemon. I wanted to try to get a Shiny Feebas (male of course 😀 ) My friend gave me his Shiny Milotic, but it was a girl…and not only that it wasn’t mine. Is that weird? I want my name to be on the Pokemon because it symbolizes your hard work lol

I did a little research and you’re supposed to have a Pokemon with the ability Suction Cups, to increase the number of reels you get. Now because of that, you can’t synchronize! I was really debating on what to do, because the right nature is very important. The first half hour, I tried to chain them while surfing on my Pokemon, and it wasn’t as torturous as chaining in a cave, but after a while these things don’t give you enough time to catch them and they run…or I end up scaring them away ;__; SO then, I resorted to my Suction cups method.

After a few tries, I finally got used to it. It’s a lot more calmer and relaxing than sneaking around, but it require A LOT of concentration. One quick or late reel in, you break your chain 😦 I was really finger twitchy and I accidentally reeled in too quick and broke the chain fml. But after a few more tries, I got the hang of it.

And so, I think about 60 or so chains, I finally got a Shiny Feebas! A male one too! Not sure if I broke the chain, if I did, it was a chain of 20ish. Now I guess this is what you get when you don’t synchronize, My Feebas ended up having a neutral nature and TERRIBLE IVS lmao. sighs, I guess I’m not super shocked, and it wasn’t as bad, so I’ll try for another one again. I know I sound really frugal but I used a Dive ball on him, because its so pretty and…soooo I wasted my dive ball on a POkemon that I won’t need, aah oh well.

Anyways, that’s my up to date Shiny hunt lol Shiny hunting is actually easy and fun. My SHiny team is coming together and I can’t wait to finally use them online! Even though I have my own main team, I want to have a separate team just for SHinies ^.^ Anywho, till next time!

Wow, I just got another Shiny pokemon! 😀 It was a Shiny Zorua! I’m so happy! actually I got him yesterday, but I have some internet now. I named him Rin (Free anyone? If so, I know Rin’s hair is red, and Shiny Zoroark is purple..whatever! The toothy grin is the same 😀 ❤ )

I was doing the Zorua Dexnav chaining, and let me tell you Zorua runs away like there’s no tomorrow. SOmetimes he would just Break my chain of 12..-_- I’m like, Zorua please, you’re cute and all, but why you run away?!?! Anyways, it was funny because, just as I was doing one more last chain, I looked away sighing and thinking “I should just breed this..or give up ugh..” and then…………… I looked over and saw the blue hair! And then the sparkle sound flooded my ears…THERE WAS THE CUTIE POO.

And it was a boy! Well they are mainly boys, but whatever, I was soooo happy! And I remember it had 3 perfect ivs! So yaaay! It’s a rash nature, (I was synchronizing Timid) but its ok, +Special Attack and – special def, which is fine since poor  Zoroark is frail anyways 😀 imma let him hold the focus sash so he doesn’t die easily ;__;

Ahh I’m so happy, I only encountered him 76 times, and I broke so many chains, I thought I wouldn’t see it, but I did! When I wasn’t expecting too, so that’s the best part 😉 I think now I’m going to make a Shiny team, so right now I have Zorua, Eevee (gonna get dat male tho), Ralts and planning on getting Axew (darn thing keeps running away too!) and possibly Electrike..maybe 🙂 And then I have that free Shiny Metagross from Steven, so yay! A team of Shinies!

Anyways, hoping for more luck! Hope you get your dream Shiny too! ^__^

YASS you read  the title correctly, I have just encountered my first Shiny pokemon in ORAS!! Yaaay! and its a SHINY RALTS! WHOOOO I literally was screaming my head off when I saw this cutie, did I mention it was a male?

And no, I’m not evolving him to a Gallade…yeeeup, he’s going to my Male Gardevoir! (ahem, only Pokemon nerds will understand why I named him Wallace 😉 ) I don’t understand why there is so much hate on Male Gardevoirs, can’t they be fabulously beautiful too? I mean, a Female Machamp is alright, I’m not hating. Sure I prefer a male one, but come on, Gardevoirs can be male too! And they rock the dress as much as a female does. Nuff said 🙂

Anyways, I was doing the DexNav chaining, and my goodness, let’s just say it’s so much easier than the one in XY. I couldn’t get the hang of the radar, it was so annoying to me. Sneaking and creeping (lol) around is so much more fun, just my opinion. I was using a synchronized Timid ralts to find my Shiny Ralts. I already knew I wanted a male and for him to be Timid so….Gallade wasn’t even an option for me…BUUUT now that I got my shiny, I may even go for another shiny ralts and make him a Gallade 😀 It’s too perfect, sighs *yaoi fangirling right now*

My first encounter with the shiny ralts was actually really quick! I usually do like 2-3 hours a day of chaining, (props to the people who can do more, I just can’t sand after 3 hours) and it was a female Shiny ralts! I was like crying because it was the first one i saw! But..it was female, but whatever! I wanted to catch her anyways….and then…guess what she did….

This lil beeotch, My goodness, I was so ready to throw my DS. The funny thing is, is that I was just reading up on some pokemon that could teleport or run away…and I was just so oblivious…that ralts didn’t occur in my mind -__- So she got away, but like I said, she was a female and it wasn’t really a total loss.

And so I tried at it again, and this time it took longer 😦 But one night, I wasn’t aware I saw the glorious blue bowl cut and I was screaming hysterically!! And it was a boy! I was so happy, I mean looked it just in case (it was under level 8 anyways but whatever haha) and then caught the cutiepoo with a Great ball 😀

I’m so happy that I got it, actually I caught him a week ago, but posted this now because no internet -.- And I named him Wallace because I love that guy, he’s so fab and beautiful, why not name my new Shiny that? ^_^ I’m just hoping his IVs are decent, I’m not expecting a lot, but I just hope the checker doesn’t go like, “Yuck, he’s a disgrace! He sucks!” ;__; Well crossing my fingers for one soon, and hope you will get your dream Shiny as well!! Till next time~!

Edit: Actually today I just got my Shiny Eevee!! It caught my by surprise lol But the only thing is….its a girl 😦 I wanted a boy (yes I am obsessed with male Pokemon lol) I was planning on making it an Umbreon and it will be all blue and pretty and stuff. But its a girl..hm maybe I’ll go at it again 🙂 I have the perfect nickname for him…it would be Kuroko :’) Any KnB fans out there? You know what I’m talkin about. ❤ 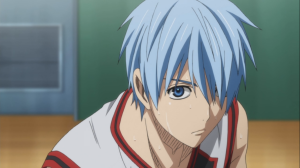 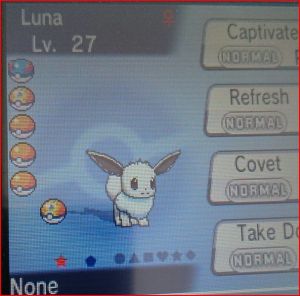